To help you get used to the new farming system, we've put together a guide Farming Wild Rift to help you make the transition. No more poverty and misery during your backs. You will finally be able to buy the Rabadon Hat or the Hextech Belt of your dreams.

As we all know, a League of Legends player cherishes two things in particular: his ranking points for bragging rights in front of his friends and his farm. For many years now, poor minions has been getting tricked over and over again to finance the intensive shopping of visitors to the Invocator's Rift. There's no reason for this to change with LoL: Wild Rift, the mobile version of the game. The farming is just as important and is vital to progress from last-hit (give the fatal blow) to as many minions. However, compared to the PC version, there are several major differences: value of minions, target automation, resistance... Even the most experienced LoL player may be confused without a precise guide.

A reminder: the value of farming in LoL: Wild Rift

Farmer minions, directed by an AI (artificial intelligence) is seemingly childish but it is very important. It's the main way to get gold coins, which can then be used to buy equipment and gain a decisive advantage. Whereas in LoL: Wild Rift as in League of Legends, it's a bit of an arms race, every penny counts. You can also find other sources of income by destroying objectives or killing enemy champions. But this is riskier, more time consuming and above all less profitable.

Before we go into depth in our guide Farming Wild Rift, there are a few things that should be made clear to League of Legends fans. The system remains broadly the same, but there are several differences. The first is that last-hitting is not mandatory. It's recommended because you get more coins for the finishing move. But if you miss, you don't leave with totally empty pockets, unlike the PC version. Also, the minions do not give the same amount of gold depending on their nature.

These are the basic values which increase during the game if the game goes on for a long time. Passive values decrease and are shared equally if several allied champions are nearby. To the delight of the Supporters!

LoL: Wild Rift is a mobile game, so the controls have been adapted to be instinctive and easy to access. The Farming requires great precision, to target the right minion and above all to attack at the right time in order to last-hit. A mistake can happen very quickly, and on top of that, you have to manage the other events of the game which take place in real time. Riot Games has therefore thought of us by adding automatic locks!

With the auto-lock system at the bottom right of your screen, it is possible to choose the type of priority target. You can therefore choose to attack as a priority: champions, turrets, minions, jungle monsters, plants... This function is a blessing to avoid getting tangled up. To be used without moderation, it allows you to instantly manage the focus so as not to miss any gold coins. As it is automatic, there is no need to take the trouble to slide your finger right on the minion to farm it.

It is impossible to fully automate the farming. This would make playing LoL: Wild Rift much less enjoyable. You must therefore also be able to manually lock on to your targets. To do this, you need to aim your attack cursor (bottom right) at the desired target. This target is highlighted (yellow) when you drag your finger and two side arrows appear when it is successfully locked manually. The main advantage is that you can choose your target (not necessarily the closest or lowest in HP). This gives you more flexibility and control over the waves of minions.

Some people are already worried that they will lose precision and precious farm time. Take a deep breath and know that this mobile MOBA does things right. Even though aiming is manual, it is assisted overall. When aiming at a nearby location that is not exactly on a minion, the game will still recognize your target. The hitboxes are rather neat and offer a more comfortable playing experience. In any case, the best farmers are those that juggle the two types of locks perfectly.

Number of shots from towers to kill minions

When it comes to farming, beware of several enemies. Opposing champions can quickly get in the way and your allies can also steal your precious source of income. But the biggest obstacle is the towers, which shoot at anything that moves. They hurt the champions but are also merciless against minions, who are definitely the whipping boys of all. Allied turrets think they are doing the right thing by helping you, but be careful not to miss the last-hits!

The towers kill the siegeminions in 5 shots, the minions siege in 9 shots and the minions magicians in 3 shots. It's up to you to follow the rhythm so you don't miss a single one and hear the soft sound of the gold coins.

That's the end of this guide Farming Wild Rift. With all these basic tips, there's no way to miss a single minion ! We hope you find it useful in your quest for elo! 😉 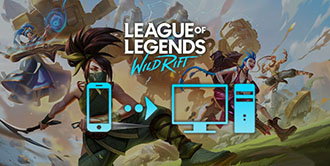