More info
Home > Tips on Gaming> How do I play PUBG Mobile with a controller?

PUBG, or PlayerUnknown's Battlegrounds, is a famous mobile Battle Royale game. This game, very realistic, propels you on a large map in solo, duo, trio or team. 100 players have to compete with many weapons available on the map!
This game is playable in first person view (FPS), but also in third person view (TPS), for the comfort of all players. While playing with a controller on Android or iPhone may not be to everyone's taste, some of you may prefer a good old-fashioned joystick to the phone's touchpad!
In this article, we explain how to use a controller in PUBG Mobile. Ready, set, fire 😉

Which controllers should I use to play PUBG Mobile?

As for playing Call of Duty Mobile with a controller, we present three controllers optimized for phone shooters:

The Elite Series 2 is an excellent choice for an Xbox One controller to use on a phone. The first generation of controllers already offered a quality Pad. This second version is totally craftable from a hardware point of view. A controller that goes the distance and that we highly recommend.

The original Playstation 4 controller is very responsive and almost indestructible. It is also much easier to connect to your smartphone via Bluetooth than an Xbox controller. So, if you want to avoid complicating your life with an excellent product, don't hesitate any longer.

The Xbox Series X from Microsoft represents the latest generation of Xbox controllers. The little plus of this controller is its great reactivity and its very good Bluetooth connectivity. Nothing to say about its ergonomics, very well thought out.

How do I connect my controller to PUBG Mobile?

A few years ago, it was possible to play PUBG Mobile with a controller through the free Octopus app. However, PUBG, like Call of Duty, has been banned from the Octopus system. It is now impossible to play these two games with this technique. The only way to play PUBG Mobile with a controller, on phone or PC, is through either Panda Gamepad Pro or Panda Mouse Pro. The downside is that both of these applications are not free.

If you don't mind paying that price to play the controller, here's how to do it:

What are the differences between touch and joystick controls on PUBG Mobile?

The precision of the controller leaves something to be desired. Nevertheless, it offers a great advantage in terms of fluidity of movement. Typically, there are very few handheld players on PUBG Mobile. Fans consider this practice to be pure cheating, since PUBG has never integrated this feature on its mobile game.
Cheat or not, playing with a controller generally makes it easier to win at PUBG. 💪

PUBG Mobile is a great game to play in touch mode, but also with the controller. Although, for me, touch play on PUBG is more loyal and responsive directly on the smartphone touchscreen! Especially since setting up a controller with PUBG Mobile is not an easy thing to do. This game is actually one of our Top 10 Battle Royales on mobile! It is extremely powerful in FPS and TPS. If you find this article useful, leave us a comment! 😊

Eleysiss
Survival, craft, BR, FPS, MMORPG... In short, discovery and fighting! What more could you ask for? 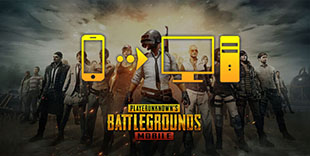