Clash Royale is a real-time strategy game, where you fight against another player somewhere on the globe. The goal of the game is simple: Destroy your opponent with your deck!
The game was created by the creators of Clash of Clans, so you will find the characters from the game on the map.

Through a multitude of cards, you must build a deck that will allow you to defeat your enemies! For the connoisseurs, we can say that it is a game in the same style as Hearthstone. However, in Clash Royale, you have the possibility to improve your cards and make them much more powerful!

Thanks to chests that you get when you win a fight, you can earn new cards and if you are lucky, you will find some epic cards! But be careful, you only have 4 slots and you can only open one chest at a time. Moreover, you will have to wait a number of hours for the chest to open, depending on its rarity. This is one of the weak points of the game!

You have 3 decks that you can change as you wish with the cards you have discovered. When you want to use one of them, you just have to stay on it.

In this respect, SuperCell does not change from its other games! The graphic style remains the same and offers you a fluid and visually pleasing game on mobile. 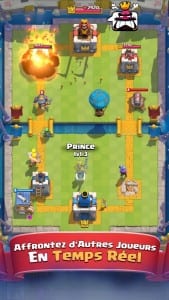 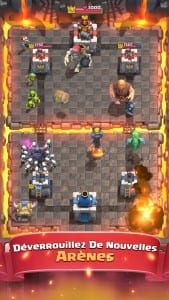 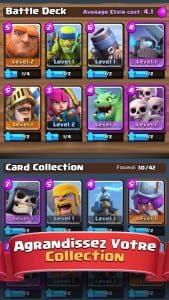 It's a pretty fun game and one that I personally share with my friends. A real little arena if you create a clan with them. The confrontations will follow one another to prove to them that you are the best!

However, I find that this game is limited in terms of playing time because of the chests that I explained earlier in test. You can still play but you won't win any more chests. Imagine that you had dropped an epic chest but your 4 places are already taken!