More info
Home > Tips on mobile games > How to play War Robots on PC or Mac? 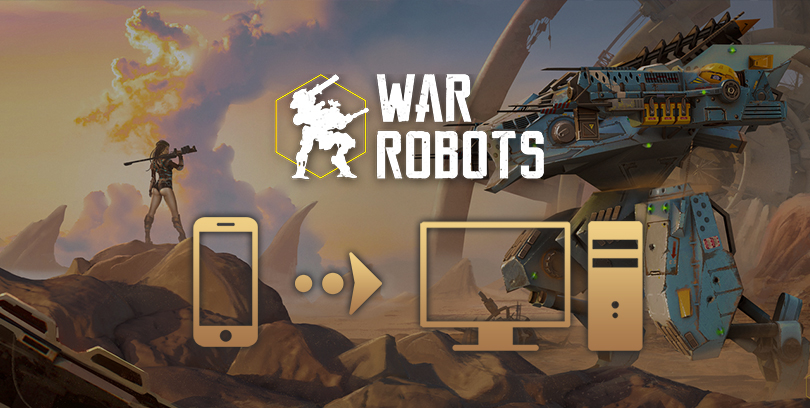 If you play on mobile and want to switch to PC or Mac, you've come to the right place! It is possible to download and play War Robots on PC with the mobile version of the game. This will make it easier for you than for your opponents, but above all, it will ensure that you don't lose your progress on mobile!

To do this, you will need to simulate your phone with an Android emulator. For this tip, I'm going to use BlueStacks which is the most stable and secure currently. Download War Robots on PC

How to install an Android emulator for War Robots?

In order to play a mobile game on a PC, you need to simulate the Android environment with an emulator, but don't worry, nothing too complicated!

Launch the installer and follow the instructions to launch the Android emulator. Once the launch is complete, you will need to configure your Google account. (as if it was a new mobile)

How to install and play War Robots on PC?

Once you have finished installing and configuring BlueStacks, you have done the hard work! You should now see the War Robots Google Play page automatically appear. If it doesn't, click on the Google Play app (on the emulator) and then search for "War Robots".

And now you can play War Robots on PC!

Now that you have installed War Robots on the emulator, all you have to do is synchronise with your mobile account so that you don't lose your progress on War Robots.

To do this, launch the game and click on thegear icon at the bottom left of your screen. Then, you will just have to authorize the sync with Google Play Games.

That's why I have just proposed to you in the tip we have just seen, a way to play with your War Robots mobile account on computer with an Android emulator so that you don't lose anything!

And that's it, this is where this tutorial ends and you can now play War Robots mobile on PC with better graphics and performance! If you encounter any problems with BlueStacks or have any questions, feel free to leave a comment or check out our article on optimizing BlueStacks 🙂

Installing an Android emulator for War Robots: is it legal?

It is perfectly legal to download and install an Android emulator on your computer to play War Robots or other mobile games. It is used to simulate the environment of your smartphone and there is nothing illegal in this process. Furthermore, we use BlueStacks (as explained in this guide) which is a totally free and secure emulator.

What are the minimum system requirements to play War Robots on PC?

To play War Robots on PC with Bluestacks 4 emulator, the minimum system requirements are as follows:

Here are the recommended settings to optimize your War Robots gaming experience:

Can I transfer my War Robots account from iOS to Android?

It's pretty rare, but in the case of War Robots, it's not possible to recover your game progress from iOS to Android. If you started the game on iOS and switch to an Android phone, well, you'll have to start from the beginning. And vice versa!

What are the differences between the PC and mobile versions of the game?

The PC version of War Robots and the mobile version are different in the sense that the game is not cross-platform! This means that if you install the mobile game War Robots on your computer (via Steam), you will not be able to retrieve the progress you had on your smartphone and vice versa. The only solution to be able to play on PC while keeping your game history is to play via an Android emulator for PC, as explained in our tutorial.