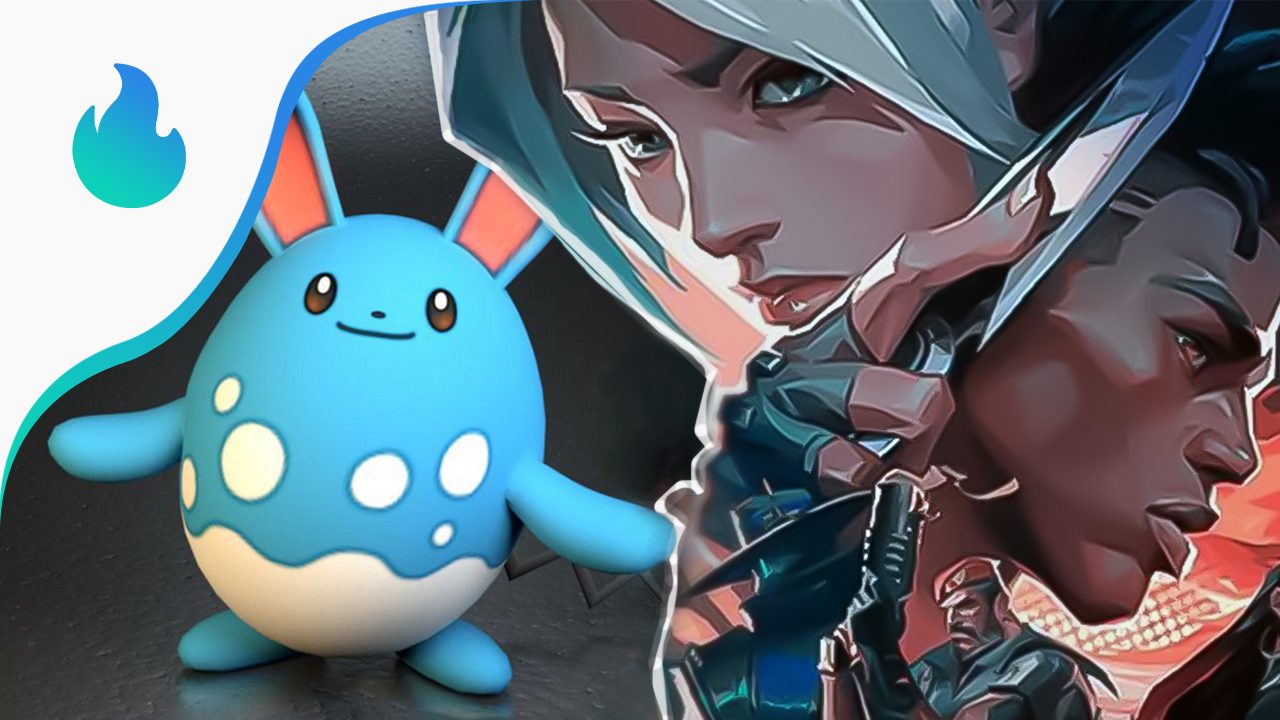 Discover the weekly recap of the mobile games news on Android and iOS for the week of April 4 to 10, 2022! We'll let you read it all below. ⬇️

On the agenda this week: nostalgic MMORPGs, AFK Arena's 3rd anniversary, Valorant mobile image leak, Rainbow Six mobile announced by Ubisoft and much more to discover in this recap.

1️⃣ We start this week's news with the Rainbow Six mobile trailer unveiled by Ubisoft. Looking at the images, the interviews given by the developers and the official announcement, we already know some details of this port. An in-house team, entirely dedicated to this adaptation of R6 on mobile, has already been working on the title for 3 years. Ubi's objective is to preserve the competitive and tactical feel of the original title with controls, an interface and a game format redesigned for mobile.

Battles are fought in 5v5 matches of 8 to 12 minutes. In addition, we know that the Frontier and Bank maps are part of the initial content as well as 10 agents, although more will be added to the roster before release. There's no word yet on when Rainbow Six Mobile will be released, but you can find out more about the gameplay in our article.

2️⃣ After a pre-registration phase, Chronicle of Infinity is being released in open beta on Android this weekend. You can download this RPG via TapTap or Playstore to make your own opinion on this new title from Neocraft, a studio that also created Guardians of Cloudia and Tales of Wind.

In short and around the world, the One Piece Dream Pointer game is entering its pre-registration phase in China under the direction of Netmarble, and does not yet have a global release window. Dungeon of GodsIn addition to the above, One Piece Dream Pointer, a roguelike RPG with stylish and dynamic graphics, is also entering the pre-registration stage. So to make sure you don't miss out on any interesting mobile releases or pre-registrations, don't hesitate to check out the dedicated pages on the site, which are updated every week.

Meanwhile, Total War Medieval 2 is now available for download on Android and iOS for $14, while M&M's Adventure, which we humorously teased in a previous review, is finally out. While we're always hungry for new games here at JeuMobi, this Mars Group title reminds me of the ads that interrupt free-to-play games that you really want to play.

To conclude this list of news, remember that the mobile version of Valorant, one of the most popular FPS of the last few years, is getting closer and closer. Since the official announcement of the mobile port by Riot Games on the occasion of the first anniversary of the PC version, Valorant Mobile has been rather discreet. It is on social networks that the title has just resurfaced with the leak of several images of the game from the closed beta.

Flyff makes a comeback on mobile

3️⃣ A little wind of nostalgia blows over this recap for MMORPG fans. Those who knew the era of the first Dofus, Nostale or Guild Wars 1 patches will surely be surprised to see a title from that era making a comeback on mobile, even if remakes and remasters are flooding the videogame scene. Indeed, Gala Lab has decided to relaunch the Flyff licence on mobile and other supports with a new game in its colourful and cross-platform (even if it is ugly) 3D universe.

Flyff already received a mobile adaptation in 2017 called Flyff Legacy, without much success. Hopefully Flyff Universe can do better.

For now, as indicated in a Facebook post, the game will soon open its pre-registrations in the South East Asian region but has not given any information about a possible worldwide release. Unfortunately, the graphics may put off many players, including us, and may only remind all the old-timers of the fun of beating up monsters in a guild in Flyff.

Launch date pushed back for eFootball 2022 and AC Milan content

4️⃣ After a shaky launch on PC in September 2021 in a limited and unconvincing free-to-play format, eFootball 2022 is trying to get things straight in the locker room before releasing its 1.0 version. On mobile, the bug-fixing is likely to take a while longer, as the developers have admitted to focusing primarily on other gaming platforms.

As a result, the release of eFootball 2022 on mobile is once again postponed, with no specific date on the horizon. However, the official content is not long in coming, as seen on Twitter with this announcement that AC Milan is the first Training Kit Partner of Konami's title.

5️⃣ While standard mobile football certainly disappoints its fans, one that involves doing tricks in a car has a bright future ahead of it. Rocket League Sideswipe is doing its PC and console version proud, and this week it's giving us a content refresh with the launch of its S3. Season 3 Rocket League Sideswipe sees the arrival of spectator mode, trio mode, a new arena called Longfield, new vehicles and a refresh of rewardsin the Rocket Pass with new content to unlock.

6️⃣ On the anniversary side, without being as symbolic as the 10 years of Forge of Empires,Angry Birds or the Sword Art Online universe, AFK Arena's 3-year anniversary is raining rewardson players. Lilith Games' gacha is taking advantage of the occasion to deploy its 1.87 patch with the heroes Audrae and Oku as well as numerous events. This is your chance to get diamonds, summoning scrolls and a lot of loot to put in your bag. The AFK Arena Anniversary event schedule can be found in our detailed article.

7️⃣ On the update side, the Fortnite no build challenge is in the spotlight this week alongside the year of the hydra Hearthstone. Other notable updates include Pokémon Unite, whichAzumarill joins the list of Pokémon available in the MOBA as a versatile fighter. TiMi Studios' title now has 34 playable Pokémon and thus an increasing variety of gameplay.

8️⃣ Even if you know that the BTS Army has total control of Twitter at the snap of their fingers, this social network is still a popular place for gamers, mobile or not, to share their love or hate of the games of the moment. I'll leave you with the time of this sentence to guess the names of the games that generated the most activity on Twitter. You might be thinking of PUBG mobile, Elden Ring, FIFA, Call of or Fortnite? Absolutely not.

At the top of the rankings published by Twitter Gaming, we find Genshin Impact on the top step of the podium then Wordle, that international motus, Ensemble Stars which is particularly popular in Japan, and then Apex, Final Fantasy, Hatsune Miku: Colorful Stage, Elden Ring, Fate / Grand Order, Knives Out and finally Minecraft which completes this top 10. So even if you've had your TL invaded by Elden Ring screenshots, this first quarter of 2022 has seen far more activity on other titles around the world.

On the tech-enhanced side, Epic Games reveals it's working on a new 3D scanning app for iOS called Reality Scan. Not going to lie to you, there are already plenty of apps that can automatically or semi-automatically compile photos to create a 3D mesh. But it's clear that Epic Games more than fits the bill with Quixel Megascans and Capturing Reality in its possession. This provides a nice synergy for Epic, which is now offering Unreal 5's high-density 3D model computation technologies to everyone, to allow the real to step into the virtual... with a few photos and an export to Sketchfab.

In addition to this news, the partnership between Epic Games and LEGO was revealed this week. Epic and LEGO are planning to work together to shape the future of the metaverse for children, in a bid to steal Roblox's thunder. The two brands have issued press releases, an interview and an Instagram post to unveil their partnership based on LEGO's expertise in providing a safe and thoughtful play environment for all children to be assertive creators for almost a hundred years.

Ukraine and Russia, a studio on the move and a fundraiser

9️⃣ The conflict between Ukraine and Russia has already made many companies flee. This week, it's Wargaming's turn to pack its bags in Russia and Belarus. The company expects big financial losses as a result of this decision but believes that this will not endanger the future of the firm.

At the same time, Epic Games and Xbox are working together to raise $144 million in support of Ukraine. The money raised will be divided between several associations working in Ukraine, namely the World Food Programme, Direct Relief, UNICEF and the United Nations High Commission for Refugees. The Z event has to behave itself.

🔟 Mobile PUBG fans, reload your weapons and get your gear ready. It's time to shine against players from around the world in an official tournament. You have until April 13 to register for the PUBG Mobile Club Open, no matter where you are. Players from all regions will be competing in various stages of the game until June. The prize is a $600,000 cash prize and a place in the world ofesport mobile with qualification for the PUBG Mobile Global Championship.

1️⃣1️⃣ The JeuMobi team is growing! We've been joined by Alco, who will be writing and editing content on the site as well as sniffing out good news, and Muffin, our new Community Manager, who you'll probably bump into in comments. Thanks to them, we hope to offer you regular content of ever higher quality.

Thank you for reading this week's news to the end, and see you next week!

Yaya
Bidule would never have spent a single cent on a mobile game. At least, that's what the legend says.