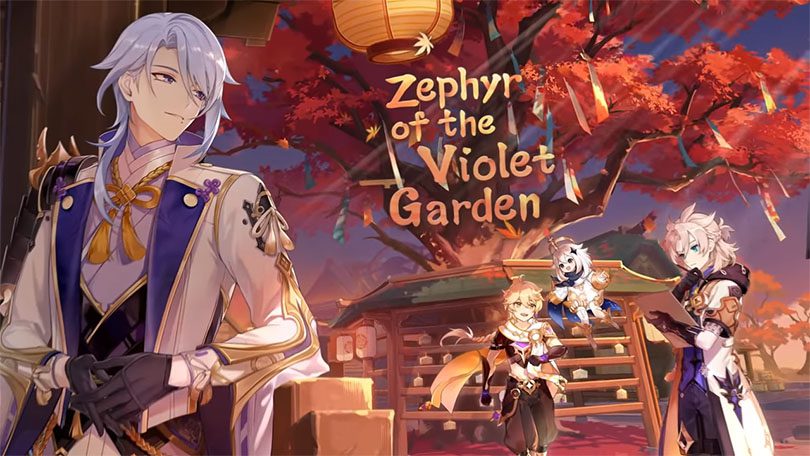 As the 2.5 update of Genshin Impact is coming to an end, Hoyoverse took the opportunity to reveal the upcoming content of the 2.6 patch during its livestream. And it's safe to say that we'll have plenty to keep us busy during the month of April! You will finally be able to explore The Chasm, continue Archon's quest, discover Kamisato Ayato, Ayaka's brother, but also earn many Primogems and rewards thanks to the various events announced. We reveal in detail everything that the Genshin Impact 2.6 Update has in store for you. It will be released on Wednesday, March 30th.

Check out the trailer for the Genshin Impact 2.6 Update " Zephyr of the Violet Garden ":

The Genshin Impact 2.6 Update starts very strong with a double banner. You will have the choice between a new character: Kamisato Ayato, Ayaka's older brother and Venti, the famous bard of Mondstadt.

The "Azure Excursion" banner offers you a chance to unlock Kamisato Ayato, a 5-star Hydro hero. He fights with a one-handed sword and is distinguished by his elegance. On top of that, the leader of the Kamisato clan promises to do a lot of damage with his elemental attack. You can find out more about him in his story quest.

The "Ballad in Goblets" banner brings Venti back to the forefront. This is your chance to unlock the Archon Anemo if you don't have it yet. We've been waiting for almost a year for its rerun!

In the second part of the Genshin Impac 2.6 Update (from April 19th), you will only have the banner of Kamisato Ayaka this time. The heroine Cryo appeared for the first time in the MAJ 2.0. She is part of the tier list of the best characters of Genshin Impact. Her rerun was thus particularly expected, especially since she will probably benefit from an excellent synergy with her big brother.

A new zone in the Genshin Impact 2.6 Update: The Chasm

In addition to Ayato and his refined techniques, the main interest of the Genshin Impact 2.6 Update lies in The Chasm. Once sealed, it is now under attack by raiders and Fatuis. Fortunately, the Traveller is there to investigate. You can finally play in this area that has been visible for a while on the map!

This new zone is an excellent opportunity to discover more about Teyvat and especially the Chasm. You'll have to investigate what's going on in the deepest part of the Abyss, in the company of Dainseilf. This may be the opportunity to see the traveller's twin again...

Exploration of the Chasm

As usual, the exploration side will not be left out. In order to light your way, you will have to rely on a new gadget: "Lumenstone Adjuvant". The item allows you to light up dark areas. Upgrade it by collecting light stones. This will allow you to get rewards, like the Crimson Agate in the Dragonspine.

A new boss awaits you in the depths of the Chasm. The Ruin Serpent is a gigantic mechanical creature, reminiscent of the Perpetual Mechanical Array.

There is also a new dungeon: the "The Lost Valley". By completing the challenge, you will be able to obtain two new artifact sets:

The events of the Genshin Impact 2.6 Update

Genshin Impact Update 2.6 also features a number of events. You can collect as many Primogems as possible to summon Ayato, Venti or Ayaka.

Inazuma has its own festival! The Irodori festival is organised by Ayato. Many rewards are waiting for you, including a free Xingqiu! The "Hues of the Violet Garden" event is divided into 4 activities:

Spices from the West

The second event will consist of preparing food, which you can offer to your characters in your Serenitea Pot to increase your affinity rate.

Make up two groups with your characters, but also test characters to fight enemies and get rewards.

Outside the Canvas, Inside the Lens

This fourth event will simply invite you to take pictures

Optimization of the mobile version of Genshin Impact

Update 2.6 will allow you to access the team menu directly by holding your finger on the icon of one of your characters.

Hazulia
Passionate about fantasy and science-fiction, I am constantly exploring many worlds in my head, in my texts and of course in video games! These last few months, it's Genshin Impact that takes up part of my days... But I also enjoy card games, fighting games, management games, manga, series, movies, etc.

HoYoWiki: the official wiki of Genshin Impact
24 May 2022

Shikanoin Heizou: a new Anemo character for the 2.8 update of Genshin Impact
18 May 2022

Diablo Immortal season 3 : all the news