Are you just starting out on Lost Centuria and are looking for the best compositions to climb the rankings? Well, dear summoner, we've got you covered! We've put together a great article for you with some ideas for compositions Lost Centuria to get you started in rank. We suggest 2 compositions per ranking level, from Bronze to Diamond: from 0 to 1,000 victory points, from 1,000 to 2,000 and from 2,000 to 3,000. Check out our tips and tricks to build your team and deck and win as many Ranked Combat mode games as possible right away. ⚔️

What you should know before setting up your composition Lost Centuria

First of all, please note that the compositions proposed here are likely to evolve over the course of the updates. Depending on the evolution of the meta, the teams we suggest could lose power or, on the contrary, become stronger. Nevertheless, we have tried to create efficient and standard compositions so that everyone can find something to create a suitable team without having toequip all their monsters with runes. Also, we bring you some advice on monsters (synergies and gameplay specificities) so that you can easily replace a champion that you would miss to complete a deck.
Finally, if you are new to the game, we advise you to first take a look at our beginner's guide Lost Centuria to understand all the gameplay mechanics.

We present here 2 teams of efficient monsters in early game. Without too much trouble and with a little training, these compositions Lost Centuria will allow you to reach the Silver V rank, i.e. 1,000 victory points.

Choice of 3 spells for these 2 decks:

This first training Lost Centuria is based on direct damage that can counter the 3 elements Fire-Water-Wind.

At the end of the tutorial, you get the 2 tanks Ramagos and Mav (position 1 and 2). The only subtlety in the game mechanics of this composition lies in the role of the tanks. Indeed, wait until your Ramagos is in the 15% of life and use Mav's skill, in order to exchange their places, then use Ramagos' spell. Understand that the latter's skill does damage according to his missing life points. It is therefore very important to let him tank as much damage as possible before swapping him with Mav.

You will use Roid (position 3) as a DPS assistant and off-tank. His defense reduction debuff will allow your backline DPS Sophia, Fynn and Sieq (positions 6, 7 and 8) to do a lot of damage. Note that you can replace Sieq with another fire DPS, if you have one (it's quite expensive).

You can buffer your monster attack and mana regen with Megan (position 4). And finally, remember to heal yourself as soon as possible with the single-target healer, Elucia (position 5).

No. 2: Area and duration damage deck

This composition Lost Centuria is based on area damage and duration while keeping a consistent DPS single-target .

The principle of this deck Lost Centuria lies in the synergy between Baretta and Thrain (positions 7 and 8) as well as Mav 's skill (position 2) and Khmun 's (position 3) for maximum stalling. The Baretta/Thrain combo is simple to understand: when you apply continuous damage with your Baretta, Thrain's multiple attack gets a 100% chance to stun affected enemies. This is a very powerful mechanic, especially when used as a counter. So pay attention to the duration of Baretta's debuff so that you don't lose Thrain's stun effect.
You'll definitely rout a lot of lower ranked players with this technique.

For the tank in positon 1, Kuhn is handy because it freezes the frontline, but if you don't have it, replace it with Ramagos. As for the composition n°1, it will do the job very well.

We now move on to the compositions Lost Centuria which will accompany your rise from 1,000 to 2,000 victory points, i.e. from Silver V to Gold V. These two compositions worked really well for us. When you master them well, they will easily move you up the rankings.

N°1 : Compo big zone damage and on the duration + temporization

On the tanks side, use Artamiel (position 1) or, failing that, Ramagos. Poseidon (position 2) is a good tank and his mana regen reduction is interesting. Bernard (position 3) is a good off-tank, he also increases your mana regeneration. Eleanor (position 4), is an ideal healer-buffer for this composition.

This team is designed to wear your enemy down. It is important to pay attention to composition to see which monster is likely to remove your harmful effects and not make the mistake of countering an Eleanor or Mikene with Nicky or Baretta. What you will do here is try to slow down your enemies by freezing them with your ice tornado. Then you will put the shield on your Eleanor, when she is alone in the frontline, to temporize. The objective then, is toinflict a maximum of damage.

Try to prepare your hand so that you have your Corruption, Baretta or Nicky and Thrain spell (position 7). Once your enemy is down or has used their monster to remove your harmful effects, you need to act quickly and intelligently. Attack with Nicky, then launch a first attack with Thrain to stun your enemies. Then use your Corruption spell or Baretta 's attack just before Nicky's duration effects end. Roll Thrain's skill.
If you play Baretta, Tesarion and Thrain, use Baretta, then Thrain, then Corruption and finish with Tesarion.
At this point, there should be little left on the opponent's board. Lapis (position 8) will be useful here to finish off your enemies and also allows you to blow up a fire backline.

For this composition, you will try to temporize as much as possible with your frontline while your backline will attack one by one the enemies with overpowering spells.

No special features here, use the Poseidon combo (position 3) and Ice Tornado to slow and freeze your enemies. Try to apply Ragdoll's debuff (position 8) to as many enemies as possible and use your lightning wisely.

In position 1, you can choose Artamiel or Kuhn to benefit from a solid tank that can immobilise enemies. Jeanne (position 2) makes her appearance in this composition, she will stun the enemy in the first line, heal and protect the weakest ally. Eleanor (position 4) will be used as a heal in the early game, then transforms into a tank to finish protecting your backline. Then, Soha (position 5) will take over by allowing you to steal your opponent's buffs. She is very strong against Woosa, for example. Sophia (position 6) will be very useful as a powerful DPS single-target. Finally, Lapis (position 8) will be effective at the end of the game as a finisher/protector.

We now move on to the more advanced courses. Once mastered, these compositions Lost Centuria will accompany your rise in the rankings up to the Diamond rank. Artamiel will be very present in these compositions, but you can easily replace him with Kuhn or Jeanne. Similarly, if you don't have Poseidon yet, well, you can replace him with Ganymede or Bernard, who can play the role of an off tank.

This deck Lost Centuria is all about Tesarion's AoE damage and requires a bit of preparation to be fully operational.

Spells chosen for this composition :

In this team, we find Artamiel (position 1), Poseidon (position 2) and Woosa the great protector (position 3). The latter is one of the best monsters to counter: it offers a shield to your team as well as immunity to harmful effects. Khmun (position 4) is also present for its high damage and the impossible heal debuff it puts on its target. Prilea (position 6) will be useful to boost Tesarion's damage by applying a defence debuff on the enemy in the first line. Then, we can count on Sophia (position 7), our faithful DPS single-target very powerful.

And finally, Tesarion (position 8), the centerpiece of this composition, the main DPS. He inflicts a lot of damage to all enemies and applies the forget effect which deactivates your opponents' liabilities, such as Perna reappearing after his death. You'll need to equip him with full attack runes and aim forATK's 15% rune set bonus to make him the most powerful monster in your backline.
If your Sophia is more powerful, place her in position 5 so you can boost Tesarion quickly with the Giant Warrior spell and Megan's attack buff skill.
In summary, Prilea's debuff on your opponents, the Giant Warrior spell, and Megan's buff on Tesarion inflict monstrous damage

This advanced composition is oriented single-target, it is very efficient against all elements, but a little less fun to play than the previous one. However, it is a composition sure value to go up quickly.

In this team, we find our faithful tank Artamiel (position 1) and again Poseidon (position 2) to slow down our opponent. Then, Bernard 's skill (position 3) allows us to attack more often and to counter an opponent's Poseidon by cancelling its slowing effect. Orion (position 4) will be useful to remove random buffs, apply debuffs and shuffle his cards. Khmun 's anti-heal (position 5) will be decisive, as will his sustain and fire damage. Fynn's huge Water damage (position 6) will be useful against the Fire element. Ragdoll (position 7) for her debuff and backline damage and finally, Sophia (position 8) for her overpowered damage.

This deck is very frustrating for your opponents because your Orion will prevent them from comboing. And this is for only 2 mana. Also, your frontline and backline deal a lot of damage. Artamiel allows you to destroy a buffed tank and will prove to be very resistant. Of course, you will abuse your Bernard's speed boosts giving you increased mana generation. It is positioned in 3rd position, because the more the game advances, the less its impact will be felt. Also remember to apply Ragdoll's debuff to the enemy backline's DPS as soon as possible.

This guide to the best compositions Lost Centuria is now finished, I hope you found our tips useful! Please feel free to share your thoughts in the comments and share your ideas for compositions Lost Centuria. Of course, all ideas are good to take and other decks are quite viable to climb in the ranking battles! By the way, to complete your knowledge, go to tier list ! Enjoy the game!

⭐️ Exclusive info: at the moment we are preparing a tool dedicated to Lost Centuria. It will allow you to know everything about monsters, to create compositions and rune sets. You can even share them with the community. You will also be able to find new formations Lost Centuria among those already proposed by other players! 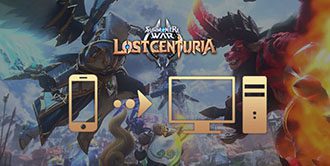